TPM Racing Class 10 Truck at Baja 1000 use Race-Keeper to capture all the action.

There were 405 total starters and 238 official finishers (58.77 percent) racing in Pro and Sportsman classes for cars, trucks, UTVs, motorcycles, and quads. Racers came from 44 U.S. States, the District of Columbia, two U.S. Territories and 27 countries in the elapsed-time race over the rugged 1,134.40-mile course. With a 48-hour time limit to become an official finisher.

Race-Keeper user Steve Tyo drove the 1015 Class 10 TMP Racing truck on the first leg of the race.  The system caught all the action on two synchronized 1080p cameras along with GPS data showing course position and speed.

The race didn’t end as hoped when at a little over 500 miles a PRO COMP Trophy Truck decided it was a good idea to race backward on the race course and hit the 1015 TMP Racing truck head-on ending their race.

HDX2 user Andy Baylie had a scary moment at Silverstone recently during a CSCC silverstone race when a simple spin... read more 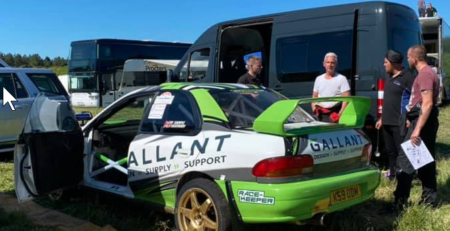 “….Not That Open!!…” Gallant Road-Keeper Rally team in action at the Flying Fortress Stages 2021